My “Phoenix Rising to New Life” painting is a very personal piece, as I’ve always felt like a phoenix rising from the ashes.

Since the phoenix is mythological, I took the liberty of depicting a more peaceful bird to represent new life. Its magical lift and effortless flight promote an appreciation for its confidence and grace, even while it is vulnerable during this stage of renewal.

[February 2019 update: I recently spared the time to go back and retouch this painting, and brought it to a professional photographer to get a better photo. As you can see by comparing them side by side, I have not taken away anything essential from the original conception, but I have merely “fixed” areas which I was unable to back in November 2014 – to complete to my satisfaction – due to not having the needed materials at the time. On the left is the 2014 version, on the right is 2019.] 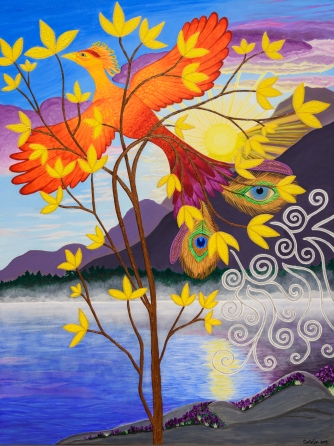 If you have ever felt like a phoenix rising from the ashes, then you will see a lot of symbolism. The level of the lake is flat, much like the flatline of a heart monitor. The rising elevations of the mountains hint at the power and strength of the new life, versus the flatline.

There is fog on the water, signifying the morning of a new day. The fog also acts as a cover for the phoenix, as it seeks a safe direction to start its journey.

Of the 4 tail feathers, two are peacock-like, one of which resembles a human eye. This eye was not meant to be the all-seeing eye of God (or perhaps I would have placed it more within the triangular area of the mountain). Instead, it is a human eye, which serves to remind us of where we have been and what we have learned, so that we can take part willingly in the transformational process of renewal.

The phoenix was a Christian symbol for resurrection in the time of the early church. The leaves on the tree occur in sets of three, pointing to the triune God. Therefore, it is fitting that the tree is in the foreground and that it stands out somewhat 3D from the rest of the painting. It also shelters the phoenix somewhat, and serves as a marker of its complete departure from its past.

Meanwhile, its old body lies in death, which is represented by the rocks in the lower right corner of the painting. It is a human body, with female form, lying in the position which it fell in death. But it wasn’t all for nothing. There are already spring flowers bursting from the fertile ash in the crevices of the rock, indicating that we leave a legacy that helps others to learn from the past and look forward to a better future.

2 Comments on “Like a Phoenix Rising from the Ashes”